Posted on December 8, 2018 by Abfalter - The Appletree Druid

Nightfall here on the northern hemisphere now surprises us in the middle of afternoon,  Krampus (who is that you ask?) has returned to his realm again for another year and we have started to bake cookies (click here for a recipe of my favorite cookies, “Vanillekipferl” (vanilla almond crescents)). Clearly, the Winter solstice is upon us, and preparation for this festival of Alban Arthan, as we call it in Druidry, are in full swing. And don’t forget to get or make your own besom, with which you sweep out the house on the solstice night, and then use pieces of that broom as incense when you smoke your house clean. In the Alps, we not only celebrate the night of the solstice, but the twelve nights after that — the Rauhnächte as we call them — are also filled with opportunities for food, drink, and stories.

Festivities in Austria means food. It always has been, and it always will. In fact, before my father died a few years ago, we co-wrote a cook book with a three course meal for each of the eight stations on the Wheel of the Year. We wrote it in German, but I am working on translating it into English as we speak. Here is a glimpse at it, addressing our seemingly historical obsession with food.

And they retired that night, and the next day Arthur prepared to depart. “My lord,” said Owain, “this is not well of thee; for I have been absent from thee these three years, and during all that time, up to this very day, I have been preparing a banquet for thee, knowing that thou wouldst come to seek me. Tarry with me, therefore, until thou and thy attendants have recovered the fatigues of the journey, and have been anointed.” And they all proceeded to the Castle of the Countess of the Fountain, and the banquet which had been three years preparing was consumed in three months. Never had they a more delicious or agreeable banquet.

You can find the quote above in the „Mabinogi“, a collection of traditional Welsh tales from the twelfth or thirteenth century CE, tales which appeared first in the earlier Red Book of Hergest. The stories tell us, amongst their main plots, also about some of the customs of our European ancestors.

Lady Charlotte E. Guest (1812-1895) not only translated the collection into English, but also researched the origins of the tales and found a web of correlations of the King Arthur stories with Celtic Europe.

Parts of the Mabinogi seem to go back into Pre-Christian times, and parts are clearly about the era of courtly knighthood, to a certain extent from the western regions of Gaulle in what is today the French Bretagne.

The excerpt above is, however, not the only one in the collection that describes feasting and drinking. In total, we find the word “banquet” thirteen times in the Mabinogi, on average once per tale, and “going to feast” is something we encounter over sixty times in the text. Yet we not only learn that they held feasts, period. In fact, they are sometimes described in elaborate details; what meats were brought to the tables, what the drinks were and even that dishes and silverware were made from gold and silver.

We find similar descriptions in other collections of lore such as in the one of the Irish heroes Fionn mac Cumhaill or Cú Chulainn. Even the Irish Brehon Laws from the fifth

What does this show us: Clearly, that feasting (opposite to the daily eating of simple meals) had an important social function in the lives of our ancestors.

And feasting, retiring to the table of one’s own castle with family and friends to enjoy a delicious multi-course meal is the essence of this book. And maybe, just maybe, we can recreate a kingly feast to celebrate one or all of the stations of the Wheel of the Year.

There is no „Celtic Cuisine“! Not only because there are no ancient Celtic recipes left by our ancestors. But we also have to consider that the area where the Celts dwelled was rather extensive. We find traces of Celts in Austria, Southern Germany, Switzerland, Northern Italy, Slovenia, Croatia, Hungary, and as far as Romania. There was even a Celtic tribe in Turkey. On the western end of Europe, they breathed the air of what’s today northwestern Portugal, western Spain, France and further up north the Netherlands, Luxembourg and Belgium (the Belgae were the most courageous of the tribes, if we were to believe Ceasar). And of course they mingled with the people of the British Isles.

The Celts were an agricultural society; they cultivated crops like barley, millet, spelt, and emmer, an older version of wheat, as well as vegetables like peas, lentils, kale, and broad beans. The typical root vegetables grown were beats, celery and onions.

Livestock breeding was the other widely practiced activity on the Celtic farmstead. Folks bred cattle, pigs, sheep – in the higher mountains also goat – and chicken. The Celts also reared Horses , but it seems that this was mostly done for trading purposes, for warriors and nobles needed these animals for transportation and warfare.

When talking about the Celts in the Alps, specifically, one would be remiss if not also mentioning rock salt. This crystal buried deeply in the sides of the mighty mountains was so important to the Celts, that centuries after their disappearance, their successors, who started to speak a form of German, still called the places they mined for the white gold “holy”. Or, in their language: “hall”. This is why still, millennia later, villages and towns bear these people’s reverence in their name, and we find Hallein, Bad Reichenhall, Hall in Tirol, and of course Hallstatt, the village giving its name to the earlier Celtic culture all over Austria and Bavaria

Fishing – except in the coastal areas – was originally less important sources of food, and hunting for large game was mostly restricted to nobility. 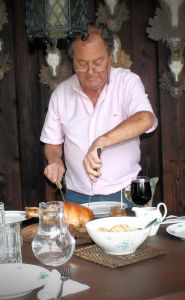 In essence, what folks brought to their tables was highly dependent on the area they lived in, might that be the sea coast, plains and rolling hills allowing for large fields, or the narrow Alpine valleys making farming tough due to incline and a short growing season because of the altitude. This is why we can’t really talk about a Celtic Cuisine, only about a Cuisine of Regions. Thus, while the Alpine region was rich in milk, cheese, and butter due to cattle breeding, folks dwelling in the coastal region of Aremorica – an area of the French Bretagne where we find the village of the Comics hero “Asterix” – for example would have more likely enjoyed fish, crustaceans, and mussels.

The region whence the following recipes origin, are the Eastern Alps, where my family is from.

Until the cookbook is published, read more about Alpine customs in my book “Mountain Magic” available at lulu.com (preferred) and distributers such as amazon.com